The Competence Centre on the Future of Work was founded in 2021 by the Friedrich-Ebert-Foundation and it is based in the European capital of Brussels.

The Competence Centre aims to promote the debate on the future of work by bringing progressive approaches into the forefront based on social democratic values.

The debate on the future of work goes beyond the context of digital transformation and touches various policy fields, e.g., economics, globalisation, digitalisation, gender equality, education and of course, labour protection and social welfare.

The Competence Centre on the Future of Work addresses multidimensional aspects of the work itself by focusing on four thematic pillars:

The Competence Centre is in the process of establishing an excellence knowledge hub comprising of a network of different stakeholders, such as Trade Union Organisations, progressive NGOs and academic actors.

The Competence Centre provides easy-to-read materials of scientific and technological topics and organises round tables, workshops, seminars and conferences by bringing different actors to discuss and debate the future of work at the European level. 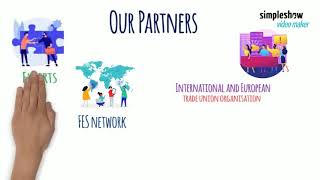 Friedrich-Ebert-Stiftung
Competence Centre on the Future of Work